Located in Lower Austria, the Wachau Valley is a UNESCO World Heritage Site for its architectural and agricultural history which dates back to the prehistoric times.

Our first stop! We took the early train from Vienna and as the sleepy town of Melk was just waking up, we got off the train and wandered around this lovely town, hiking up the steps to reach the Abbey’s entrance.

The abbey contains the sarcophagus of Saint Coloman of Stockerau and the remains of several members of Austria’s first ruling dynasty, the House of Babenberg. 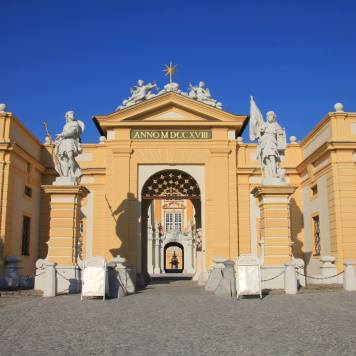 The grounds of Stift Melk

Halls of the Abbey’s Museum 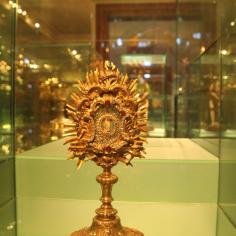 Relic of St. John the Baptist

A closer look at the relic of St. John the Baptist

Church inside the Abbey… love the intricate details inside… 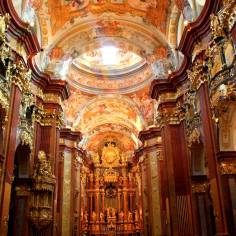 Inside the Abbey’s church

St. Michael’s Altar containing the sarcophagus of a catacomb saint whom they named Clemens. 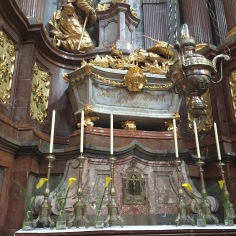 The sarcophagus of Saint Coloman of Stockerau.

The town of Melk viewed from the Abbey

After exploring the Abbey, we hurried to catch the 11AM cruise through the Danube River…

“The Blue Danube” (An der schönen blauen Donau) is the most famous waltz ever written. It was composed by Johann Strauss II with an intent to uplift Austria’s morale after it was crushed by post-war economic depression.

Personally, I grew up with this waltz, both the music and the dance. My parents occasionally played it on Sundays and I ended up learning and performing the dance (atleast twice) in school for an event. This gave me enough curiosity to plan for a day trip and see the inspiration for this timeless piece which was also a part of my childhood.

One of the most visited towns where King Richard the Lionheart of England was kept as a prisoner. (Remember the Tales of Robin Hood?)

Cycling through the Valley

Brandner and DDSG Blue Danube offer several cruise options including themed cruises. More detailed information can be found in their respective websites. There are combination tickets offered by OBB, the rail transport provider of Austria, that includes roundtrip rail tickets from Vienna, access to the Melk Abbey and a sightseeing cruise.

Train tickets may be bought going to Melk or Krems and back from the OBB website.

2 thoughts on “Cruising Through The Wachau Valley”