There are just so many reasons to visit Croatia. Its beautiful Mediterranean climate along the coast, the warm and friendly people, the amazing food… I could go on and on about the many things I love about this country. Last October was my second time coming to this country and I just fell in love with it even more! There is so much to do and see from its historical towns, exquisite national parks, crystal clear waters, diverse islands, and of course for the Game of Thrones fans out there, a lot of the scenes from the TV series were filmed here. We spent a total of 9 days in Croatia and here is how we spent our days there!

Explore the charming city of Zagreb with a Walking Tour around the city to give you a good introduction about its past, how it evolved over the centuries and about its present. According to our guide, the number of tourists have been increasing over the years mostly due to Zagreb’s strategic location as a starting point to explore the surrounding Croatian  destinations as well as Croatia’s neighboring countries: Slovenia and Hungary. I learned a lot of interesting things from this tour. One of the most fascinating landmark for me was the meteorological clock which the local people of Zagreb relies on for weather forecasts. Included in our tour was a ride in the shortest funicular in the world and making it on time at the foot of medieval Lotrščak Tower to witness the cannon firing which happens everyday on midday and has been a tradition for 140 years. These are just a few of the many interesting things I learned about Zagreb and I definitely recommend doing a tour with a local in this delightful city.

Day 2: Plitvice Lakes Tour with morning coffee in the village of Rastoke and cheese tasting.

We booked a private tour via getyourguide.com. Our guide picked us up from our Airbnb apartment at 7 am and we headed out for a 4-hour drive to Plitvice Lakes National Park. On the way, we made a quick stop at the War Museum and picked up some fresh bread at a local bakery in Karlovac and headed on to the village of Rastoke. Stopping by this lovely little village for a morning coffee was indeed a perfect way to start our day. Arriving in Plitvice National Park was like a dream!!! The lush green forest, crisp fresh air and the sound of flowing water was a great way to rejuvenate the senses as I went for a walk in this UNESCO World Heritage Site in the middle of the Croatian forest. We finished our tour with a relaxing stop at a family run restaurant for cheese tasting. Our gracious host taught us a little bit about the cheese products that they make and about Croatian cheese in general.

Day 3: Travel to Split from Zagreb by train 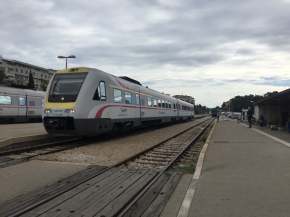 On Day 3 we headed on to our next destination… Split! The train ride through the Croatian countryside was absolutely scenic as I had expected passing through mountains, valleys, medieval ruins… and of course, the Adriatic coastline! It was already afternoon when we arrived in Split and soon after we checked in, we decided to spend the rest of the afternoon relaxing in the Promenade which was considered to be the living room of the local people in Split. The Promenade is lined with several cafes and restaurants where you can enjoy a nice meal, have a drink as you wait for the sunset or have coffee and dessert. 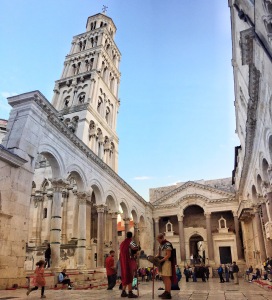 As you might know by now, I love doing walking tours. I think it’s a really fantastic way to get personally acquainted with the whole city and to know its history and get local tips as well regarding where to eat, what to see, best souvenirs to buy, etc. 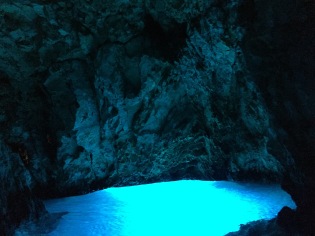 Although it was already getting windy and chilly when we went in October, we just couldn’t miss doing the Island/Cave Hopping Tour which we did with Sugaman Tours through Viator. We visited several islands including Hvar and had wine tasting at the Island of Brac. The Blue Cave is definitely not to be missed!

Hvar 5 Islands and Blue Cave Tour from Trogir and Split

Day 6: Travel from Split to Dubrovnik by bus

The bus ride from Split to Dubrovnik took 6 hours and it wasn’t excruciating at all. I thoroughly enjoyed viewing the coastline and all sceneries in between for most of the ride from my window seat. Soon after we checked in at our Airbnb apartment and grabbed something to eat, we decided to walk around Dubrovnik Old Town. Since I have been here before, I gave my friends a little tour of what I remembered from my previous trip. We also decided to check out one of the Buža Bars which is a popular swimming and relaxing spot for locals. Buža, in the old Dubrovnik dialect means “hole”. And to get to this unique café bar, you have to go through a hole-in-the-wall… yes literally! 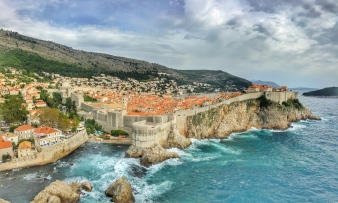 I highly recommend doing a Walking Tour of Dubrovnik’s Walls. Typically the walking tours don’t include access to the walls. Tickets are 150 HRK per person and includes access to both the City Walls and Fort Lovrijenac. I also suggest doing the tour in the morning so you have enough time to explore the walls on your own or to grab a bite and enjoy the views as the walls are only open on certain times.

Day 8: Take a Day Trip to Montenegro and explore Budva and Kotor 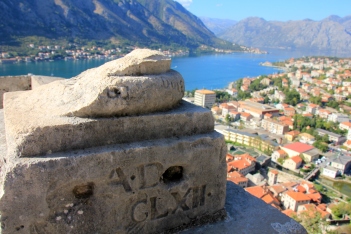 Montenegro is a fairly young country which gained its independence from Serbia only about a decade ago. Our first stop was the Montenegrin coastal town of Budva which is a popular tourist destination due to its numerous beaches, diverse nightlife and beautiful Mediterranean architecture. We then made our way to our next stop… the UNESCO World Heritage town of Kotor. As we reached the town, one thing that really caught my eye were the city walls built directly above the Old Town and stands on almost vertical cliffs. It looked like a short version of the Great Wall of China.

Day 9: Explore Mostar and Pocitelj on a Day Trip from Dubrovnik 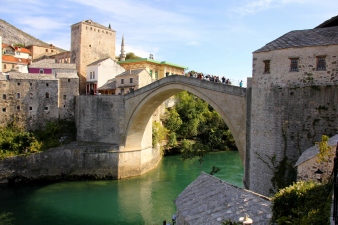 The beautiful city of Mostar is a popular tourist destination for its Old Town and its iconic Ottoman style bridge called Stari Most (Old Bridge), named after the bridge keepers (mostari) who guarded the bridge in the Medieval times. It is a UNESCO World Heritage Site and its tragic yet touching history is one that is worth knowing. We also made a quick stop in another UNESCO World Heritage Site, the Citadel Pocitelj. Built in the late 14th century, much of the original architecture is well preserved and is an excellent example of medieval and Ottoman design.